How I am using the vertical space created by my vegetable garden enclosure.

It has been nearly 12 months since I installed a steel and mesh enclosure over my vegetable garden.

My initial reaction was “wow how easy is it now to access and work in the space” but with time I have started to see the advantages of the structure for use in vertical production.

I had a very set space that I wished to cover as I had existing beds and mature planting. If you are just starting out and planning a vegetable garden that will be enclosed, then taking into account the amount of vertical space you can  utilise means that production per spare meter is greater and you can potentially reduce the size of the enclosed area, which will cost less.

On one side of the enclosure, I already had established espaliers on the chicken run fence so these were incorporated into the enclosure and have been every productive and a lot less effort than having to cover them with netting. Espalier is an easy, extremely productive way to grow certain fruit trees. It is great for pome fruit such as apples and pears, and I successfully grown citrus this way as well.

On another side I had a bed of I had a row of fruit trees consisting of a lemon, an orange, a mandarin and 6 pillar apples. As these were up against a fence, they were difficult to net so I have had limited harvest off them over the years.

To reduce the height of the enclosure I cut these trees back down to 2 meters high and have now effectively hedged them. They do need to be pruned (height and width) several time during the growing season but have still produced great crops. 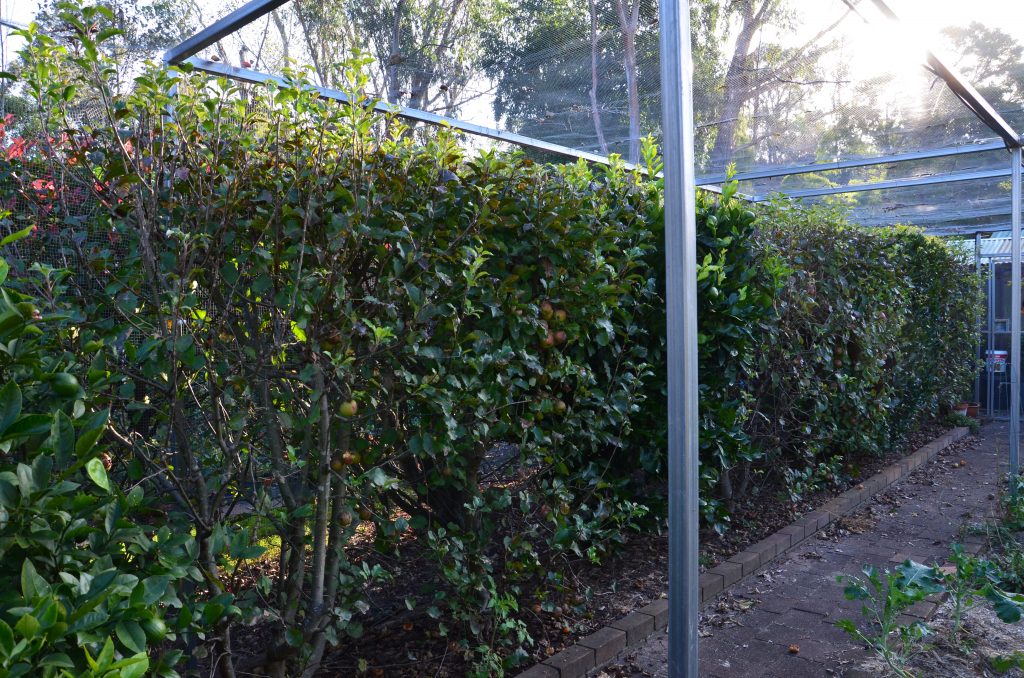 I have hedged the fruit trees on this side of the enclosure.

The espaliered apples and the hedge of citrus and apples are on the south east and south western sides of the enclose so there is no trouble with shading of any part of the garden.

The other two sides of the enclose have northern eastern and north western aspects so I did not want to grow anything up these sides to maintain maximum sun exposure, which is needed for most vegetables and fruit trees.

Next, I installed several trellis systems along the southern sides of the garden beds. These are separated from the fruit trees by a path. These trellises will support annual crops that naturally which produce tendrils and can self-attached such as climbing beans, climbing peas, vine tomatoes and the cucurbits: mainly cucumbers, but next year I will try pumpkins- the fruit  will need to be supported  as it matures but with the  trellis being of solid weld mesh this should not be a problem.

I also have some thorn less blackberries trained against one corner of the orchard enclosure. By tying then up the mesh and only to a height I can reach they are easy to pick.

A blackberry tucked into a corner of my enclosure

Whilst the enclosure keeps birds from eating my strawberries when I was growing them on the ground, the slugs and slaters were still attacking them. To overcome this, I installed six hanging baskets, installed drip irrigation to water them, filled with strawberries and I have been picking fruit all spring, summer, and autumn.

Hanging systems can also be used for tomatoes (Cherry varieties) or upside-down lettuce or herb production.

After previous experience of vines on chicken enclosures I have deliberately not planted vines such as grape or Kiwi fruit on my new enclosure. They are very rampant, have very persistent means of attaching themselves to the netting, making pruning and removal difficult. Without constant maintenance they will cover the entire enclosure very quickly, shading all  other plants that need full sun.

By taking advantage of the vertical spaces created by the enclosure you can increase your production greatly. Just remember to concentrate these vertical systems on the southern (southern hemisphere) sides of your enclosure to prevent shading of the rest of your garden.

I have used some of the central uprights as support for cut flowers such as this chrysanthemum.